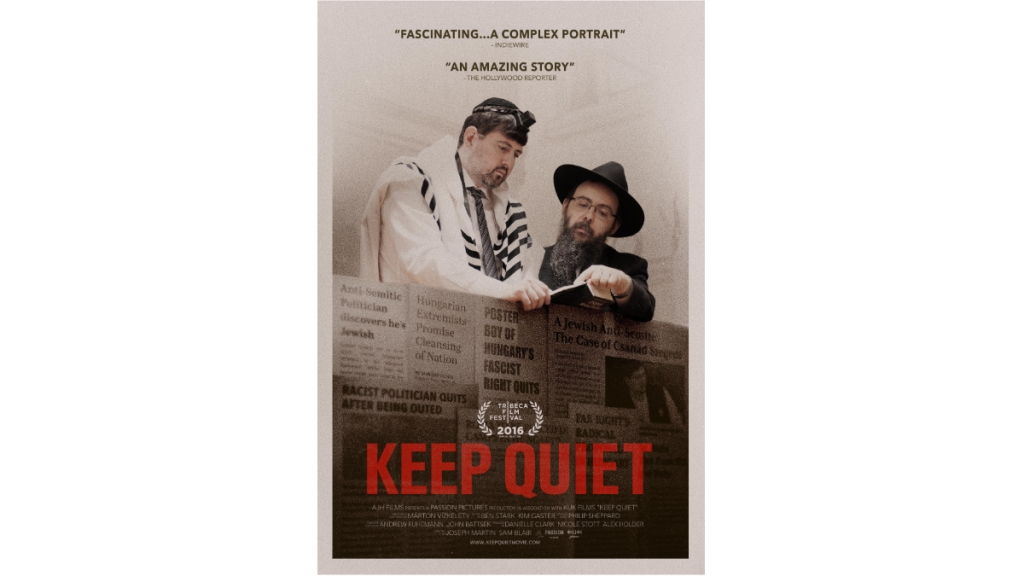 87′ for Passion Pictures & AJH Films in association with KUK Films

Csanad Szegedi’s story is remarkable; as vice-president of Jobbik, Hungary’s far-right extremist party, Szegedi regularly espoused anti-Semetic rhetoric and Holocaust denials. He was a founder of the Hungarian Guard, a now-banned militia inspired by the Arrow Cross, a pro-Nazi party complicit in the murder of thousands of Jews during WWII.

Then came a revelation which transformed his life: Szegedi’s maternal grandparents were revealed to be Jewish and his beloved grandmother as Auschwitz survivor who had hidden her faith fearing further persecution.

Keep Quiet depicts Szegedi’s three year journey as he is guided by Rabbi Boruch Oberlander to embrace his newfound religion, forced to confront the painful truths of his family’s past, his own wrong doing and the turbulent history of his country. But is this astonishing transformation a process of genuine reparation and spiritual awakening, or is he simply a desperate man with nowhere else to turn?

“A superb piece of nonfiction filmmaking, telling a story of import with grace and intelligence.”  JEWISH WEEK

“[An] amazing story… Should provoke strong controversy upon its theatrical release. It’s fascinating throughout.” THE HOLLYWOOD REPORTER

“The filmmakers astutely reveal how a culture can eat another alive and somehow live with itself.” SLANT MAGAZINE

“If you want a controversial fest title, this is it.” TIME OUT NEW YORK

Begin typing your search above and press return to search. Press Esc to cancel.